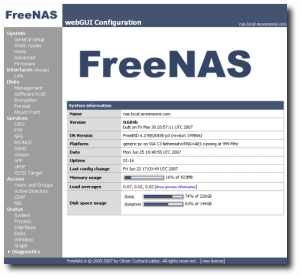 I have searched the web up and down for information regarding building your own Home NAS Raid 5 System. There is a lot of information out there and I ended up with the Linux base FreeNas. So here is my story.

I have chosen the ThermalTake Lanbox Lite which have 1 fan in front and 2 in the back (+ one optional). Here’s an review of the case. There reason are the small factor case with room for 5 hard disks, my setup uses IDE-CF Card Reader and 5 Seagate SATA 500GB on a Adaptec 2610SA 6 port SATA (Dell OEM). The size of the Raid 5 system is 1,8TB. Information about installation FreeNas on CF Card can be found in this blog.

Normally when people build Home NAS Server’s they tend to reuse old hardware. So I started this project with my old noisy P4 system but with a new Cosair VX450 PSU. I don’t care to much about noise, but the heat became a problem since I have the NAS box in my living room where I have my router. The total system where draining 150W with a temperature of 35C and quite some noise in free air, but inside my cabinet, ooohh my… 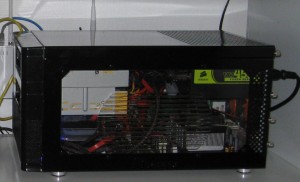 I could of course invest in a silent CPU fan, but they are expensive compared to the new Intel Atom Dual Core® Desktop Board D945GCLF2D. So I installed this motherboard with 2GB of memory, got a lot of more space inside and the system drained only 100W with a temperatur of 26C, only +2C of the living room. The system is quite silent now compared to before.

The motherboard also have integrated 1000 Mbps LAN, but be aware that the driver is not part of the current version of FreeNas, you will find the solution in this forum.

The rest of my system contains a Mac Mini with SABnzbd, PlexApp Media Center and RadioLover. The speed of the system from FreeNas to MAC are 20 MB/s and only 5-6 MB/s to FreeNas. It could of course be better, but it works perfectly streaming HD720P. 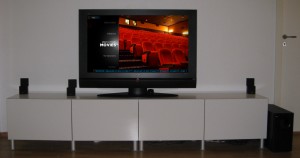 I successfully install the nightly build FreeNAS-i386-LiveCD-0.7.4572.iso. This version contains the NIC driver which wasn’t include in the new FreeNAS 0.69.1 (Omnius) released 20th of April. The transfer speed went up from 20 MB/s to 24 MB/s.