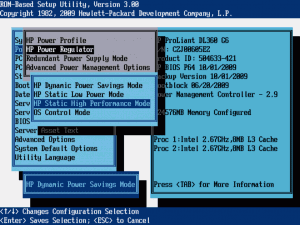 Green IT was the hottest buzzword before Cloud entered the scene. For this reason there’s a lot of new servers configured by default by the manufacturer to provide the best balance between performance and power consumption. So what does this mean?

Well most of the HP servers delivered today are running with the CPU Core Speed 1,6 GHz instead of the intended 2,3 – 3,2 GHz. So to get the full power of your Citrix XenServer hardware you need to do some chiptuning in the BIOS. For HP servers you set HP Power Regulator to HP Static High Performance Mode (see main picture).

You can verify the before & after results by using the freeware CPU-Z to gather information about the CPU Core Speed. 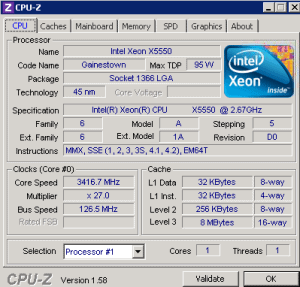 Real world scenarios has showed that customers that has changed the BIOS setting to High Performance Mode has seen an increase in user density and much better application reponse times. This applies mostly to Citrix XenServer and XenApp / XenDesktop VM’s but also to servers running Low Latency Applications.

If you have a BIOS snapshot from other hardware vendors please send us an email so we can add it to this blog post to better help other people with similar problems.

3 thoughts on “Unleash the Power of your Citrix XenServer”