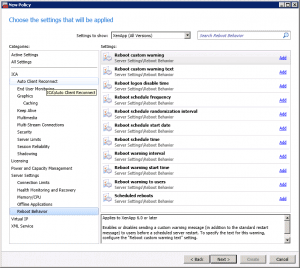 Many of you are probably familiar with the new Reboot Behavior Policy. Maybe you’ve scratched your head trying to figure out why the Citrix policy didn’t work. Maybe you’ve spent a whole day until you came upon this blog post telling you that the Reboot Behaviour Policy only works with Enterprise or Platinum license. Thanks for letting us figure it out the hard way Citrix!

Some of you may also have tried Citrix Power and Capacity Management finding out that it needs a similar license, its own database and control server. Kind of overkill for small SMB environments with only 10-50 servers.

A couple of weeks ago I stumbled upon a superb Citrix XenApp Rolling Reboot Script created by Dane Young. The script supports XenApp 5-6.5 and basically it uses a Load Evaluator to drain servers one by one. Once all sessions have been logged off, the server will go down for a reboot.

The script will also validate that the last rebooted server was successful before continuing on to the next server in the farm. By implementing this script in your organization you’ll get a zero-downtime 24/7/365 system without the annoying “Please Log Off” messages.

We’ve been running this script successfully for a couple of weeks with great success. Right now we’re having a dialog with Dane Young to add more features and further improve the script e.g. adding the possibility to create an Exclude Servers list to the Citrix XenApp Rolling Reboot Script.

In Citrix XenApp 6.5 there’s now also a great new feature called Logon Control that will let you drain servers without adding any form of Load Evaluator. 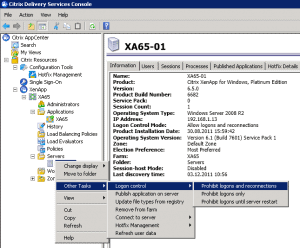