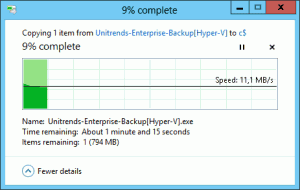 When putting most of your workloads on a Hypervisor you should not take for granted that you automatically get the maximum performance out of the box. You as the administrator need to perform additional tests to verify that the network performance are at it’s best.

Last week I upgraded my Citrix XenServer Home Lab and gained 10x faster network performance. In this blog post I’ll show you how you can run some simple tests to accomplish the same. 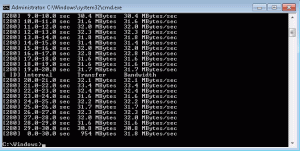 As you can see from the image above the bandwidth is around 31 Mbytes/sec.

When running the same Virtual Machines on Citrix XenServer 6.1 with all hotfixes applied I got 60 Mbytes/sec on average. This makes sense as described in this article regarding the importance of keeping the network drivers up to date. 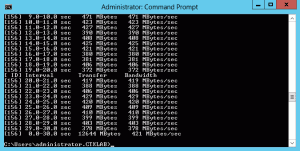 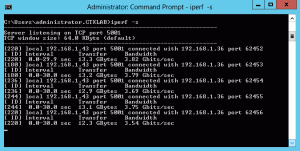 Check that out, the network is 10x faster on the latest version of Citrix XenServer and Windows 2012. So needless to say, all my servers have now been upgraded to Windows 2012.

I also wanted to try out the free Microsoft Hyper-V Server 2012 on my old hardware to see if there where any performance difference between XenServer and Hyper-V. With 2 vanilla Windows 2008 R2 I got 205 MBytes/sec.

This is just an example to demonstrate the importance of doing proper testing. My lab hardware is not on the Citrix XenServer HCL and the RealTek network adapter has caused problems on many XenServer builds.

When you’re on it, make sure you get good performance between 2 VM’s hosted on different hypervisors since the traffic goes through your switches and not internally.

With the introduction of my new App-V 5 Training Course I teach you how to leverage Share Content Store in VDI / SBC. Since the App-V 5 applications are streamed directly 10x faster network means everything for the end user experience.