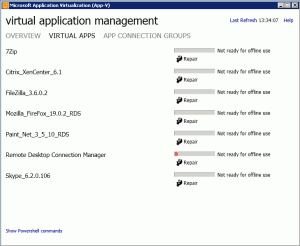 We’ve been doing server virtualization for years and hopefully most businesses run the majority of their servers on a hypervisor from Citrix, VMware or Microsoft by now.

With the release of Microsoft Application Virtualization 5.0 the same is going to happen to the application space. I remember back in the days when VMware took off, those consultants got some pretty amazing projects at their hands.

The same is happening now, so you better learn App-V 5 today.

At Citrix Synergy next month the learning lab “Implementing Excalibur on Microsoft Hyper-V” is running every day. Attendees will learn about next-generation delivery architecture of Excalibur with Microsoft’s newest operating system and System Center 2012 SP1. This is not a coincidence!

There are many reasons why App-V 5 will be part of your XenApp or RDS environment, either you want it or not. Below is the main reasons :

There are many more reasons, but seeing is believing. I’ve created a new App-V 5 Training Course to get you up to speed. This is the fastest and easiest way to learn Microsoft Application Virtualization 5.

So if you want to become an App-V 5 expert, you better get started. Microsoft App-V 5 is becoming the de facto standard and WILL be the way we handle applications in the near future.