Ericom AccessNow is a software that allow HTML5 Browser-based RDP Access to any Remote Desktop enabled computer or server using just a web browser. The software provide instant access to Windows desktops and application from almost any device. The exception is Internet Explorer users which has a Desktop Market Share of 53% January 2012 according to NetMarketShare. Internet Explorer doesn’t natively support HTML5 WebSockets so these few users need to install Google Chrome Frame.

The installation of Ericom AccessNow Server and WebComponent is straight forward and you’ll be up and running in a couple of minutes. Brian Madden has already posted a great article : A deeper look at Ericom’s “AccessNow” HTML5 client. Why wait for Citrix & VMware? This thing is out now & works with View and vWorkspace. In this post I will focus on how to install and configure Ericom Secure Gateway (ESG) instead. This is a SSL Gateway that’s free of charge with Ericom AccessToGo, Blaze, PowerTerm WebConnect and AccessNow.

First of I need to said that I was disappointed of the setup wizard that didn’t check for pre-requirements which made the installation fail with “Error 1920. Service Ericom Secure Gateway (EricomSecureGateway) failed to start. Verify that you have sufficient privileges to start system services”.

After getting this error on 2 different servers and no Google match for this kind of error I went of to read the documentation and it turned out that Ericom Secure Gateway requires .NET Framework 4 Client Profile. The wizard also had some check boxes for adding port 443/444 to Windows Firewall inbound rules, but this didn’t work for my Windows 2008 R2 Server so I needed to do this manually. 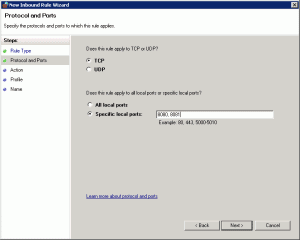 An administrator can modify configuration settings for AccessNow by editing the config.js file that is installed as part of the AccessNow web component. This makes all settings pre configured instead of asking the user to configure the AccessNow Server address, RDP host, domain, Secure Gateway address and so on. I would really like an application that creates this config.js file instead of me messing around with code I have no clue about. My guess is that it would cost around $200 creating something like this. 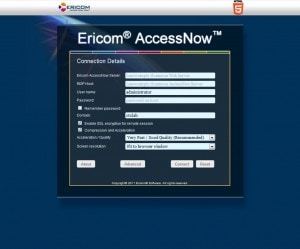 Ericom AccessNow is a great product that could be even better with a few improvements.

In the coming AccessNow version 2.0 Ericom will add support for HTTPS communication as an automatic fallback when WebSockets are unavailable or cannot be used. As a result, AccessNow 2.0 will very shortly support Microsoft Internet Explorer 9 without requiring the installation of Google Chrome Frame.

Ericom advises that they are enhancing the installer to perform pre-requirements tests, as a part of Ericom AccessNow version 2.0. The same applies for the missing information in the documentation listed above.