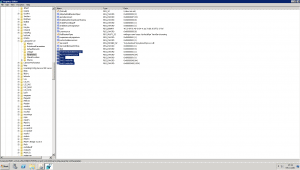 More and more people are moving their file servers to Windows 2008. For this reason it’s essential to do some SMB 2.0 tuning in the registry to get the best possible performance with Citrix XenApp 6.x.

SMB 1.0 was originally designed 15 years ago and was introduced with Windows 3.11 for Workgroups. Since the fastest networks in use at the time generally offered a maximum transfer rate of 10 Mb/s, the protocol has become out of date.

SMB 2.0 is the new version of SMB that has been redesigned for today’s networking environments and the needs of the next generation of file servers. SMB 2.0 has the following enhancements:

SMB 2.0 seems to perform significantly faster than SMB 1.0 under optimal circumstances. I’ve heard of improvements ranging from 50% faster to 3500% faster. The bad news is that, as you might expect, you have to have SMB support on both ends of the communications pipe for SMB 2.0.

Our XA5/XA6 Group Policy Tuning Templates have been downloaded more than 12.609 times. The SMB 1.0 tunings are ready-to-go as long as you set the values on your File Server(s) correctly. If you’re running a pure SMB 2.0 environment there’re still some SMB 2.0 Tuning needed. These registry keys needs to be added to your File Server(s).

All credits for this article goes to Dan Allan from Citrix Consulting. Make sure you check out his in-depth article SMB Tuning for XenApp and File Servers on Windows Server 2008 over at Citrix Blogs.