Most customers have delayed the upgrade to Internet Explorer 7 or 8 as long as possible. The reason is memory / CPU usage especially on Terminal Servers, but this applies to personal computers and VDI as well. Some of the biggest web pages in Norway have been promoting upgrades similar to YouTube and Twitter and now the Norwegian Center for Information Protection strongly recommend to upgrade. So Internet Explorer 6 is approaching its end of life and it’s time to move on.

A lot of projects these days are focusing on server consolidation leveraging virtualization to get more users on each hosts. Planning and Proof Of Concept is the essential to success. Don’t believe everything you hear about increasing user density / server by four times, avoiding purchase of additional hardware.

In this first post I will show you what happens with your memory usage when you upgrade Internet Explorer (IE). I have tested all the different versions of IE on 13 different web pages. The tests have been run on Windows 2003 SP2 and every IE version have been patched with the latest updates. IE have been open and closed after 1 minute and the memory usage have been recorded. The latest version of Adobe Flash / Shockwave and Sun Java have been installed with the Core Applications FrameWork. 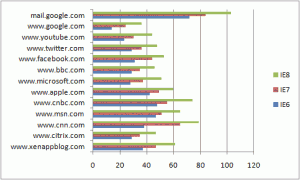 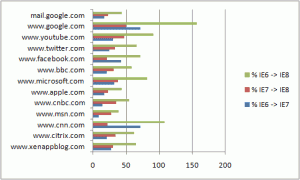 From these numbers you can easily see that upgrading only Internet Explorer will have a huge impact on the maximum users per Terminal Server. In the next article in this blog series I will show you what you can do to reduce the memory usage with registry tuning and Citrix HDX Mediastream for Flash.

PS : Remember to Subscribe to RSS and connect to XenAppBlog on Facebook so you do not miss out on important news.